How to promote your sporting event

At The PHA Group, we specialise in providing PR support for multiple mass participation events.

Most recently we have worked with a number of brands including UFC (Ultimate Fighting Championship) – the world’s largest and highest mixed martial arts promotion, as well as successfully launching the endurance event ToughMudder to the UK, and for the last four years, we have worked closely with the Royal Parks Half Marathon.

The 11th edition of the Royal Parks Half Marathon takes place on Sunday 14 October where we will see 16,000 runners go through four of London’s eight Royal Parks, including Hyde Park, The Green Park, St James’s Park and Kensington Gardens.

It is still the only race of its kind that takes place in the major parks of central London, and whilst there have been some small changes to the route over the years, the race continues to celebrate London’s most iconic green landscapes.

In order to create as much noise as possible ahead of the event, and to ensure The Royal Parks Half Marathon is continually positioned as one of the most iconic events in London, we have worked tirelessly to deliver a successful communications campaign over the last four years. We’ve regularly delivered over 200 pieces of coverage around the race and employed excellent tactics to achieve our client’s objectives.

This year we have achieved over 80 pieces of coverage alone in outlets such as the Evening Standard, Women’s Health, Daily Express, Metro and Independent.co.uk.

Working with charity partners
The Royal Parks Half has remained focused on its charitable aims which is a credit too much of its success with their many charity partnerships. The race has now raised in excess of £36 million since 2008 for its participating charities. Working closely with the races charity partners, we have been very successful at placing runner case studies of individuals who are taking part in the event to raise money for their respective charities. Last year, we placed 40+ case studies for charities including GOSH, Cancer Research UK, Mind, and MacMillan. Helping to increase their fundraising efforts. 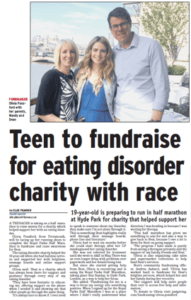 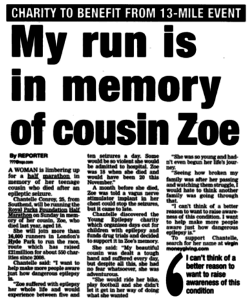 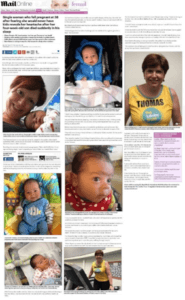 Maximising sponsorship opportunities
The Royal Parks Half Marathon work has different sponsors each year and we work closely with them to maximise coverage around the race. Whether that’s inviting journalists to do a gait analysis at Runners Need, to placing expert comment from coaches at TruBe, to announcing corporate sponsorship deals with Royal Bank of Canada, our campaigns always maximise opportunities. 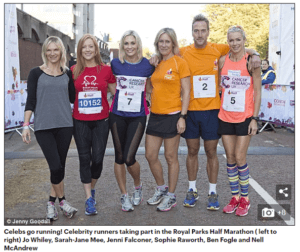 Media engagement
Every year we have secured attendance from at least 30+ journalists including London Evening Standard, Mail Online, Daily Express, Mirror Online, Metro, ITV London, The Telegraph, Men’s Fitness, Women’s Health and Women’s Fitness have all taken part in the event in the last few years. 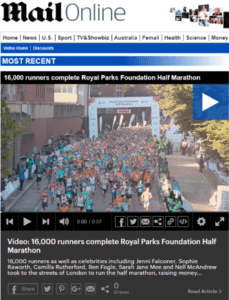 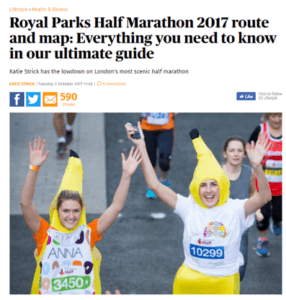 We pride ourselves on delivering impactful, measurable campaigns for our clients and don’t stop working until the job is done. As a team, we are hugely passionate about sport and fitness and love what we do. You can expect that enthusiasm to shine through in every aspect of our work.