Creativity is the key: standing out on transfer deadline day

With the summer transfer window fast approaching, in-house marketing and communication teams from football clubs up and down the country will already be locked away behind closed doors discussing how they can capitalise on the buzz created by new signings and how they can enhance the global reputation of the brand.

You might think that the bigger clubs, with bigger budgets, would be leading the way, but in fact, some of the smaller clubs in England are muscling in on the conversation and hitting the back of the net when it comes to delivering impact for their transfer window activity.

Whether it’s a £100m player signed to help your club win the Champions League or the combative midfielder that will help you stave off the threat of relegation into the Football League, gone are the days of simply announcing a player’s arrival on the club website with the classic shirt and handshake image.

Here we look at some of the most creative player transfer reveals over the last few years.

Aston Villa pulled off one of the biggest coups in recent history when they signed former England captain John Terry from Chelsea last summer. One of the most decorated players ever to have graced the English game, rumours placed Terry on three different continents at the same time, but it was Steve Bruce’s Aston Villa who secured the players signature. Villa announced his arrival with an imaginary WhatsApp group chat between the Villa chairman and manager Steve Bruce, along with past and present players, before “John Terry” was added to the group.  Simple but clever from Villa.

German international defender Antonio Rudiger was Chelsea’s first high profile signing last summer and his arrival delighted one Chelsea fan. Chelsea posted a video which follows a father and son to the counter of the Chelsea megastore at Stamford Bridge, where the dad asks his son what player’s name he wants on the back of his new Chelsea shirt. “Rudiger” is his reply. The cashier then pops his head into the storeroom to ask Rudiger himself if it’s OK. “No problem — I’m a Chelsea player now,” the Germany international responds.  At the time Chelsea supporters were growing increasingly frustrated by a lack of transfer activity but this was a nice touch from the Premier League champions.

Perhaps the most extravagant of them all but also befitting of the world’s second most expensive player of all time, Paul Pogba’s return to Manchester United rewrote the rules of sports marketing. This was more than just the return of Pogba, this was the combined genius of Manchester United and kit sponsor Adidas.

The entire unveiling was planned weeks in advance with Pogba featuring in online videos arriving in the UK, and touring the club’s training ground. If you thought that was good, Adidas enlisted the help of grime star Stormzy and created a music video which featured Pogba singing alongside the star. A #POGBACK hashtag was created and the rest is, well, history…

A far cry from the glamour and riches of the Premier League, Oxford City, who ply their trade in the sixth tier of English footballer, posted an image of their new signing on their Twitter account and it went viral after social media users retweeted it hundreds of times… after noticing he was sat in a McDonald’s restaurant. New arrival Matt Paterson was snapped signing the contract at the popular fast food chain prompting McDonald’s themselves to respond to the tweet. Despite initially being ridiculed for the tweet, the post drew widespread attention from media and it was Oxford who were smiling the next day when the story made the back pages of several national newspapers.

ICYMI | We are delighted to announce Matt Paterson has joined ahead of the 2017/18 season pic.twitter.com/SyUHAf5jiM

In July this year, Snapchat launched a new feature called “Snap Map” and the social media team at League Two Yeovil Town quickly saw an opportunity to jump on the back of the latest social trend by tapping into the new feature. The feature allows users to share their location with each other, so the club created a short video to show who was located at the stadium, Huish Park. Step forward new signing Jake Gray. They might be plying their trade in the bottom tier of the football league, but this was Premier League quality from the Somerset club’s social media team.

The new @Snapchat feature is pretty cool. You can see who's at Huish Park…✍️⚽️😉 #YTFC pic.twitter.com/YhFHRd7wM0

What better way to appease fans frustrated over a lack of transfer activity than to announce the signing of a new player by tweeting one of the fans directly. Well, that’s exactly what West Brom decided to do when @RieceWBA started an online campaign and tweeted @ the club for 11 consecutive days asking them if they were planning to sign any new players. On the 12th day, West Brom signed Jay Rodriquez from Southampton and to mark the announcement, the new striker recorded a personal message for @RieceWBA. 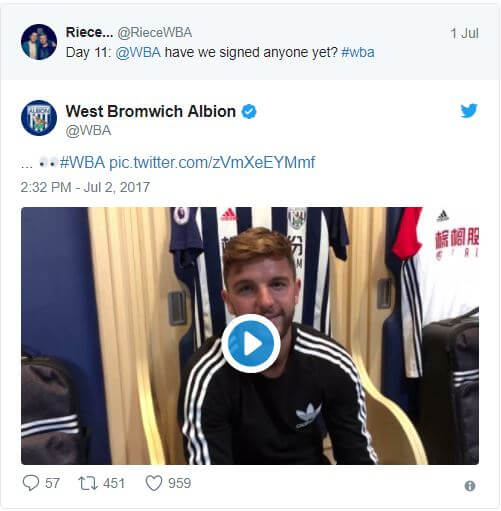 Social media has come to play an increasingly prominent role in the way that clubs operate in the modern game and is evolving rapidly. It will, therefore, be interesting to see what new, innovative uses of the different platforms clubs will employ during the summer 2018 transfer window… watch this space.