Animal charities occupy a great deal of space in the third sector and have created some of the most successful campaigns that we’ve seen in recent years. There is a risk, however, for animal charities to fall into the trap of guilt-inducing videos. These can cause viewers to cringe away before they engage with the issue. It seems shocks tactics are on the way out, and in their place, we are seeing a series of imaginative and varied campaigns that really work to capture and maintain people’s attention. Here are our top 5 creative animal charity campaigns:

This shocking but brilliant campaign from PETA Asia highlights the cruelty practised every day in the exotic-skins and leather goods industry. As consumers, the reality of what we wear is hidden from our consciousness by glossy shop fronts, designer labels and personal ignorance. This project demonstrated to shoppers what their fashion choices mean for animals the world over, forcing them to take ownership for the harm that this necessitates. PETAs bold statement sent shockwaves through social media, with the original video hitting nearly 4million views. PETA drove home the message that these skins belong on the backs of animals, not hanging in our wardrobes.

Working with IKEA in Singapore, Home for Hope came up with an innovative campaign to encourage families to adopt dogs by making them look like part of the furniture. Home for Hope placed a number of individual life-sized cardboard cut outs of each dog around the IKEA showrooms, with a personalised QR code attached. Once shoppers saw how the homeless dog could fit in with their home all they had to do was scan the code to start the adoption process. Teaming up with IKEA was a particularly clever move in a bid to target people who may be moving house, perhaps to somewhere with space for a new canine companion. This campaign delivered a really effective and creative strategy on a tight budget, and we think that deserves some recognition.

The WWF have a history of clever campaigns that inspire people to donate to or ‘adopt’ the world’s most vulnerable animals. Some of their most impressive work over the years has been focused on the tiger, possibly the most iconic animal of all time. Yet the tiger still faces constant threat to its habitat and wellbeing. WWFs ongoing campaign aims to double wild tiger numbers by 2022; this relies on donations to fund everything from the rangers in the field, to care programs and efforts to stop poachers. This campaign encompasses the video above as well an immersive Tiger Experience, set up in White City Westfield. Using VR, WWF engaged more than 5,000 potential donors and took 12,000 participant photographs. This overwhelming response saw The Tiger Experience generate 21% more sign-ups than originally targeted. This is a great example of how new technologies can be used to rejuvenate well-documented campaigns and issues.

Battersea Dogs and Cats Home have plenty of emotive content to work with, and an easy hook for a nation obsessed with their pets. They have utilised this approach well for many years, but this campaign takes a different tactic to encouraging adoption. The #LookingForYou campaign took a simple leafleting approach and transformed it into an interactive and immersive experience within your own shopping trip. The dog in the video followed potential donors around the shopping centre, appearing at every corner they turned, just like a real stray would. This charming and gentle approach shows that not every animal charity campaign needs to reduce you to tears to be effective, although we have to be honest, this one had us pretty close. 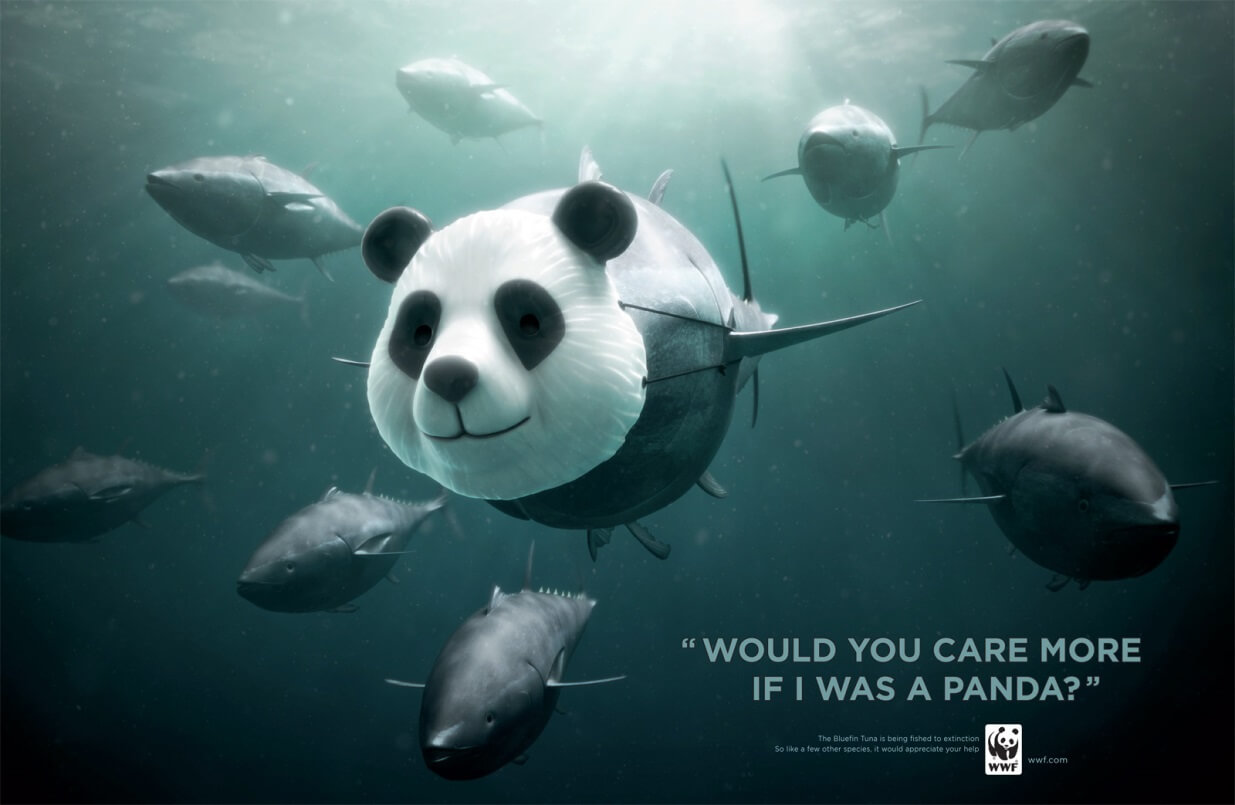 The last on our list is a hugely important PSA from WWF about the endangered status of the Tuna and the apparent lack of care expressed by the public. This series of image based adverts challenges this conception and urges us to think about this hugely important species, even if it isn’t cute and fluffy. This is an ongoing problem for campaigners within ocean rights and sustainability; WWF has played on this by changing the face of Tuna as we know it. The genius of this campaign is in its forcing us to consider our flaws and prejudices, to acknowledge all life as equal and worthy of help, not just those with fluffy ears and a tail.