Tony Bellew – The in-demand heavyweight with only one feasible fight

After the events of March 4th at the O2 in London, Tony Bellew proudly declared that he was the most wanted heavyweight, aside from the belt-holding champions, Anthony Joshua, Deontay Wilder and Joseph Parker.

Fast-forward nearly five months later, and he has ruled out fighting both Joshua and Wilder due to believing they are ‘too big’.

Parker is contractually-obliged to fight his WBO mandatory, Hughie Fury (cousin of Tyson), leaving Tony Bellew with only two realistic opponents for the near-future.

Two-weight world champion and widely-regarded as the best pound-for-pound fighter, Andre Ward has expressed an interest. Although this is a man who has fought at super-middleweight (three weight-divisions below heavyweight) for most of his career.

Some may point out that Tony Bellew formerly fought at light-heavyweight, Ward’s current weight. However, when you consider that Bellew and his promoter, Eddie Hearn, laughed off suggestions of a fight against Chris Eubank Jr. who is only an inch smaller than Ward and a current super-middleweight champion, it leaves you with questions.

Ward may have held world titles and beaten the likes of Carl Froch, but he is still relatively unknown to the boxing casuals, despite a career spanning nearly 13 years.

As a result, there is far less money to be made in this fight. Bellew has admitted he has two fights left at most so they must be the most financially-rewarding.

This leaves only one man for the Liverpudlian, his fierce rival, David ‘The Hayemaker’ Haye. The pay-per-view buys for their first fight were around three-quarters of a million, a second fight could certainly come close to nearly a million. 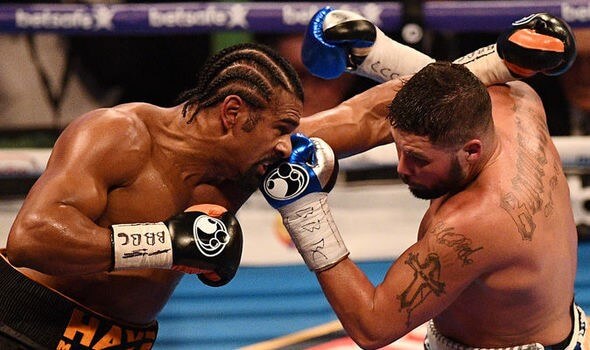 Love him or hate him, Haye brings a huge audience for several reasons. He is a former two-weight world champion, good-looking, charismatic and controversial. With the gift of the gab, he has talked himself into big fights and drawn huge audiences despite a career plagued by injuries.

The demand for a rematch is so great due to, firstly, the pre-fight antics, where both fighters expressed what appeared to be a genuine hatred for the other in somewhat comic fashion.

From Bellew leaping out of the ring at the end of his last fight, to Haye’s impression of Eddie Hearn, it became the most talked-about grudge match around.

However, the main reason for such high demand is down to Haye visibly rupturing his Achilles in the 6th round of their first bout.

The Londoner had appeared to be dragging his leg for the first five rounds, hinting at an already-present injury. It only became apparent in the 6th, after which, Haye struggled to stand up for the next five rounds.

Many believed that a fully-fit Haye would knock-out Bellew. This appears to still be the case due to Bellew being unable to stop a one-legged Haye for five rounds.

It certainly would end one huge year for British boxing.