Following the nomination in August, we’re incredibly proud and excited to announce The PHA Group have won Best Public Relations Campaign at the B2B Marketing Awards.

The awards were hosted at The Honourable Artillery Club in Central London and are known for recognising organisations of all sizes – from Google and Barclays to Worldpay and now QinetiQ with The PHA Group.

The award feels particularly poignant. Not least because both The PHA Group and the B2B Marketing Awards are celebrating their 10th Anniversaries this year, but also because just a quick glance at the nominees for each category conveys how fierce the competition is.

When it comes to public relationship campaigns, at The PHA Group we’re known for a journalistic ethos that brings stories to life. And that’s precisely what we achieved with our work for QinetQ and the 5% Club.

Founded in 2013 by Defence technology company QinetiQ, The 5% Club is an initiative aiming to redress the problem of youth unemployment and the skills gap. As an industry-led campaign involving several listed and privately owned companies, it calls on all businesses in the UK to sign up and pledge that within five years, their workforces will comprise 5% apprentices, graduates and sponsored students.

Why? Because there is a burning need for young people to develop relevant skills and confidence in the work place. Moreover, those who are best placed to make a difference are not governments or charities, but businesses.

It is time to invest in the next generation.

It is time for the business world and its captains to step up to the plate in creating demand for apprentices and graduates if Britain was to be competitive with the rest of the world.

Out of dozens of agencies, QinetiQ chose The PHA Group to launch this campaign, which has grown from the original eight signatories from the Confederation of British Business, to having over 125 members. These include Vision Express, Airbus Group, Croudace Home Group, Ofcom, the National Nuclear Laboratory, and the Ministry of Defence. There are lawyers, marketers, engineers, surveyors and recruitment specialists involved. It has featured in national newspapers, has spokespersons interviewed on national broadcast platforms such as Sky and BBC’s impressive Today Programme. In total, there have been countless pieces of coverage for the 5% Club.

Such results were the effort of The PHA Group’s long-term media plan, which in truth could only be realized with the commitment and dedicated of the founding membes of The 5% Club and those companies which have joined over the past two years.

From delivering an impactful launch through broadcast, online and print media, and though various social media channels, to continuing the momentum through thought-leadership in key titles and profile raising coverage for the campaign.

The PHA Group are immensely proud of what The 5% Club has achieved for young people in Britain and in our role in helping its message reach the UK. 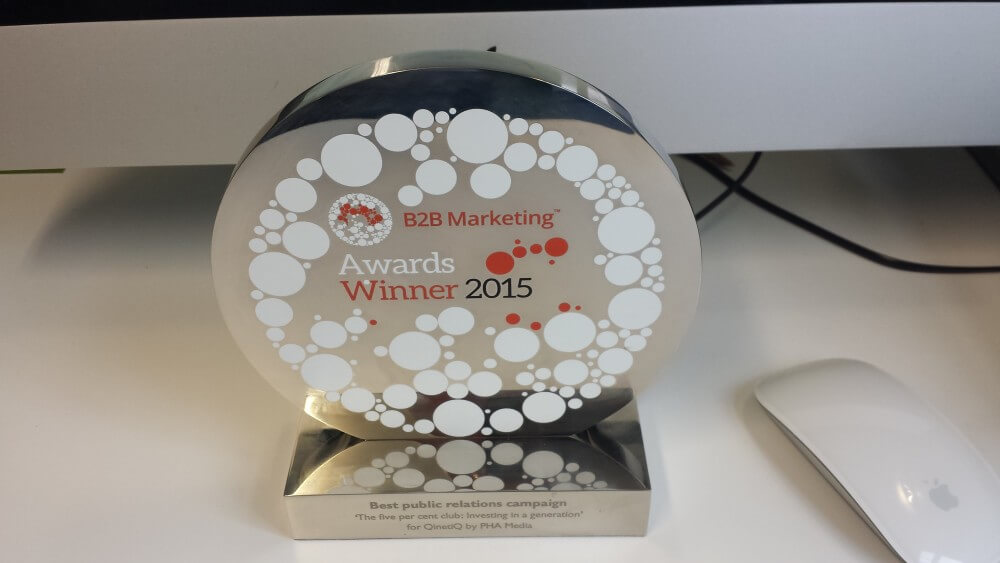 Best Public Relations Campaign  ‘The Five Per Cent Club: Investing In a Generation’ for QinetiQ by The PHA Group[/caption]
Written by
Get in touch with the team
Contact us