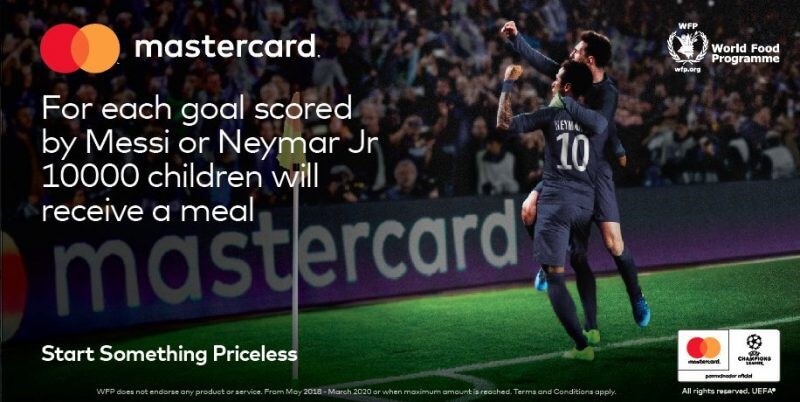 As excitement for the World Cup grows, we’ve been keeping a close eye on what brands are doing to get involved in the conversation or utilise their sponsorship of the competition. One campaign that has most definitely caught our attention is Mastercard’s World Cup initiative with the World Food Programme.

The premise is simple – For every goal Messi and Neymar score in the tournament, Mastercard has pledged to donate 10,000 meals to children in the Caribbean and Latin America.

We always admire a creative campaign at The PHA Group, and how brands can piggyback off an event to be topical and part of the news agenda, but we feel Mastercard may have missed the mark (or goal) with this one.

Mastercard’s heart would have been in the right place, however the execution raises more than a few eyebrows. The backlash on social media says it all – from keepers becoming public enemies for saving shots, to the pressure on the players and why Mastercard doesn’t just give meals to children in the first place instead of it coming down to a game of chance.

So if the keeper saves their shots, he hates starving children!

It's like playing god with starving children and a massive insult and unfair on the players, if you miss this penalty you've just starved some children. Just give them the food, and do offers for customers for every goal scored.

Even Ian Wright has got involved in the conversation, calling it the worst marketing campaign he has ever seen – questioning how this idea was green-lighted after rounds of sign off. To be fair, he makes a good point.

So, like an England penalty shootout, how did this go so wrong for Mastercard?

The obvious answer is to not play on the hunger of children.

If Mastercard had instead decided to run a promotion with its value increasing with every Neymar or Messi goal, the feedback would not have been so negative. Instead, it would have created a genuine way for people to want to see either of the players’ score and give Mastercard an authentic and credible way to be involved in the conversation throughout the tournament.

As it stands, what are Mastercard going to do if Messi misses a sitter? There isn’t an opportunity to do a light-hearted social post with a fun gif, as this will just look like Mastercard are rubbing their 10,000 free meals in the faces of impoverished children.

It will be interesting to see how Mastercard responds to the reaction and if they continue with the initiative. It takes a lot for a brand to admit they got it wrong.

We hope you enjoyed our thoughts, if you are interested in learning more about the importance of PR and how it can help you or your business please get in touch with a member of our team today.