Kim Kardashian and the Danger of Snapchat

At around 3am on Monday morning, reality TV star Kim Kardashian was the victim of a terrifying armed robbery, when 5 masked men stormed into her Paris house and stole around £8.5m of jewellery. Johanna Primevert, chief spokeswoman for the Paris police department, claimed that the men deliberately targeted “possessions that had been seen and noticed via social media”, prompting the question as to how sensible it really is for celebrities to flaunt their expensive goods online?

While one cannot blame Kardashian for the incident, it is possible that the attack would not have happened had the robbers, who were wearing items of police uniform, had not been aware of the jewellery’s presence in the city. The star of popular TV series ‘Keeping Up with the Kardashians’ had been in Paris for the French capital’s fashion week and had broadcast pictures of her jewellery to her millions of online followers via such channels as Snapchat, Instagram and Twitter. Just three days before the incident, Kardashian had snapchatted an image of herself wearing the second engagement ring given to her by her fiancé Kanye West, which is reportedly worth around £3.5m on its own. Once in the house, the masked men apparently shouted ‘ring, ring’ in reference to the item and this awareness could well be down to its appearance on social media.

Security Expert Christopher Hogan told People magazine that it looked like an “organised attack based on known information”, suggesting that Kardashian’s online posts, as well as pictures showing that her bodyguard was with sisters Kourtney and Kendall that night, helped the thieves pull off their crime. It is not the first time that social media has enabled robberies targeting famous people, with the infamous ‘Bling Ring’ burglarising the homes of many California-based stars after researching their schedules online. Locations were found using Google Maps and other similar sites, while Facebook and Twitter were scoured to decide on the opportune time to strike.

Kardashian is said to be “badly shaken but physically unharmed”, but things could have been a lot worse for the American, who was tied up and had guns pointed at her forehead. So should celebrities be more careful about what they share with the public online?

The obvious answer is yes, but for some (the Kardashians being a perfect example), fame and fortune have been achieved primarily through the sharing of their private lives. While safety should clearly be the main priority for these individuals, their celebrity status sometimes depends on the detailed contents of their social media posts, meaning that they are unlikely to suddenly cut down their posts.

The Kardashians are immensely popular (the five sisters have nearly 130m Twitter followers combined) and this shows how keen the public are to hear about their daily lives, which just encourages more and more shared information.  It is unlikely that this interest will wane anytime soon, and with financial incentives to maintain it, celebrities will continue to reveal their locations and activities, either by choice or through the exploits of paparazzi. 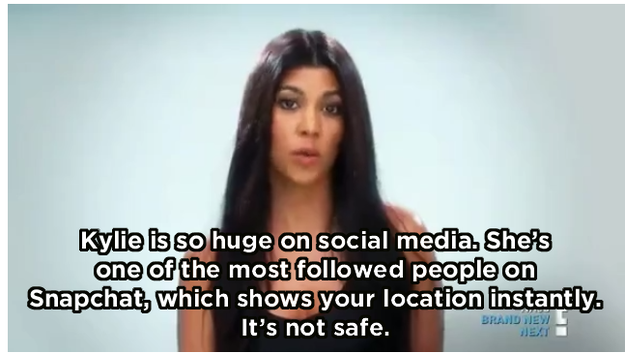 If people were less interested in reality shows and the like, then stars like Kim Kardashian would feel less pressure to publicise potentially dangerous information like their location and possession of expensive goods. While posts featuring extravagant lifestyles sometimes flirt close to arrogance, they are perhaps an inevitable result of society’s media tastes.

It’s a hard balance to strike for the modern day celebrity. One could argue that it’s the public’s constant demand for mundane details of their lives pushes them to divulge more and more with no strategy in place should the unexpected or, in this case, disastrous occur. Whilst this situation is extreme, many celebrities have found themselves in the centre of a social storm due to the unpredictable nature of social media.

Social media never stops and is not limited by the same legal issues as traditional print. Whilst these forums aren’t going anywhere it would perhaps be pertinent for prominent figures such as Kim to have a social strategy in place or at least some expert advice to help them understand how to maximise their social presence without putting themselves at risk. After all, the horrific events of this week can be seen as a reminder that nothing is truly private online and that even when sharing to please followers, one should be careful about what they let the world know.