As those of us who move in media circles know all too well, picking the right spokesperson or celebrity ambassador to align with your brand can quite literally mean sink or swim, particularly where charity organisations are concerned.

On one hand, working with a popular celebrity ambassador or allowing a larger-than-life figurehead to represent your brand can greatly improve a charity’s public image, but the upshot of it is that any negative publicity surrounding that person can potentially reflect badly on the organisation and end up inflicting long term damage. 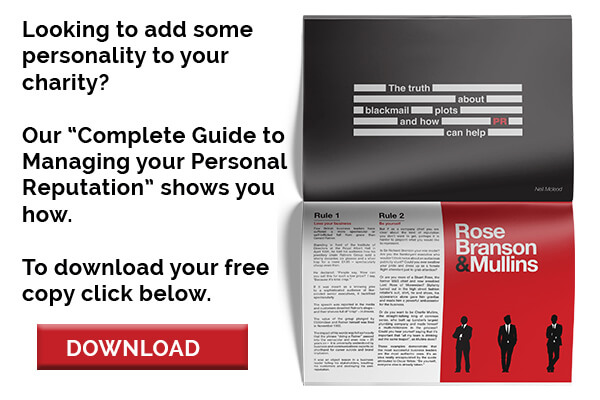 One example that springs to mind is that of Camilla Batmanghelidjh.

Between 1996 and 2015, Camilla Batmanghelidjh was best known as the founder of Kids Company, a well-respected UK charity which worked closely with children and young people.

During this time, Batmanghelidjh became a high-profile media spokesperson for the charity, who was constantly in the company of celebrities and politicians; she was even dubbed the “Angel of Peckham” in the media, while the Daily Mail called her “Our own Mother Teresa”.

Even The Guardian described Camilla as “one of the most powerful advocates for vulnerable children in the country” – what a fantastic position for the brand to be in.

However, in 2015 all of this unexpectedly came crashing down amid allegations of mismanagement and a spiralling financial crisis despite receiving millions of pounds in government funding.

After a few desperate attempts to claw back credibility, shortly after the furore Batmanghelidjh was forced to step down as the charity’s chief executive, and devastatingly for all those who worked for the charity, as well as the families who relied on their support, Kids Company was shut down.

When you strive to humanise your brand through linking with a celebrity or someone who is already well-known by the media, there are several questions you need to consider apart from whether they can help raise general consumer awareness or encourage fundraising. For example:

It’s no good having an ambassador or single leader at the helm of your charity if the only thing journalists want to speak to them about is their recent drugs scandal/racist comments/financial issues/alleged affair. Not only that, the last thing you want on your charity website is a picture of someone who has been exposed as being a bit of a shady character.

Another important thing to consider is, will your existing supporters continue to respect your charity if they perceive the organisation to be spending thousands on celebrity ambassadors?

In a decision that completely horrified its supporters and potential donors, last year children’s charity Barnardo’s ‘fessed up to agreeing to pay £3,000 for Binky Felstead (of Made in Chelsea fame) to take part in a PR and social media campaign to get more people to shop in its stores.

While Barnardo’s quickly issued a statement in reaction to some negative Press saying “Barnardo’s does not usually pay celebrities who support our work with the most vulnerable children across the UK”, the damage was already done. The move sparked outrage from some charity fundraisers, particularly from Tory MP Charlie Elphicke who described the transaction as an ‘insult to volunteers who toil to raise cash for needy children’. Ouch.

Although Binky agreed to waive her fee for the activity (which she was allegedly planning on donating to another charity), and then promptly sacked her agent, her brand was also temporarily left in tatters, while the charity lost the respect of many of its supporters.

Authentic support from celebrities in the right form, however, can be welcomed by the public. Take for instance the new UNICEF campaign featuring long-time Unicef Goodwill Ambassador David Beckham.

Having supported the charity since 2005, David is now fronting the charity’s End Violence initiative, which aims to stamp out the mistreatment of children around the world. UNICEF recently launched its campaign video which shows Beckham’s famous tattoos animated with a series of images which highlight the different types of violence children suffer, such as domestic, bullying and online grooming and abuse.

With over 11 years of working with UNICEF, David has also visited Cambodia, where he has met some of the children who have suffered violence and abuse.

Shortly after his visit, he also attended the United Nations to call on world leaders to put disadvantaged children, at the centre of the new Sustainable Development Goals, a universal call to action to end poverty, protect the planet and ensure that all people enjoy peace and prosperity.

As a result, all of these elements tie together beautifully to create a clear and convincing message that conveys what the charity is trying to achieve. Of course, the celebrity endorsement isn’t everything here, but the support of a passionate celebrity has helped UNICEF reach new audiences with that message.

Whether pushing a celebrity or figurehead is the right thing for your charity is largely down to the objectives you are trying to achieve as an organisation. However, the message is clear; while It is rare that issues occur, before putting all your eggs in one basket consider how your brands align, what your supporters and potential donors will think of your decision, and what happens if that person’s reputation is tarnished.