We are no strangers to an MMA Fight Week. Over the past decade, the PHA Sports team has provided on-event comms at dozens and dozens of events, all over the world. However, we knew that this time things were going to be very, very different.

On Saturday 26th September, Bellator MMA returned to action on European soil for the first time since the outbreak of the coronavirus pandemic and, after a seven month hiatus, returned with a bang – hosting four events across three weeks in two different cities. First up, were three events behind closed doors in the city of Milan. This was then followed by a history-making Fight Night in Paris, when Bellator became the first major mixed martial arts promotion to host an event in France.

As Bellator’s European PR agency, three members of PHA’s sport team travelled out to Milan to join the event team ‘bubble’ and to run the on-site comms for the first three shows. We were thrilled to be able to play a part in Bellator’s return to European action, and to see how a major sports event would operate in this strange new world.

Upon arrival at the hotel, all team members were sent straight for a Covid test, and then to their room to isolate until the results came back. Once given the all-clear, we were then free to move around the hotel (socially distancing as much as possible and wearing masks) but were not able to leave except to travel to the arena.

In addition to all of the Covid secure measures in place, clearly the biggest irregularity as far as we were concerned was the absence of media. The traditional Fight Week ‘media days’ became virtual sessions, with our team orchestrating things on the ground whilst Bellator’s US team provided the technical support. We also set up additional interviews for fighters and Bellator execs, sent out regular media alerts and updates and handled other issues as they arose, i.e. when fights were removed from bouts as a result of a positive coronavirus test (which happened on a couple of occasions).

The Fight Nights themselves were as explosive and entertaining as ever, but of course, the atmosphere was totally different. In a near-silent arena it was particularly fascinating to watch and listen to the cornermen and coaches in action – normally drowned out by the crowd noise, this time you could hear every word as they guided their fighters with tactical insight from cage side.

Normally post-fight, each winner will come into the mixed zone to speak to media in attendance, but this time they joined us in the media room where we hooked them up to journalists around the world, via zoom, to answer questions. With the US team once again providing the technical back-up, the fight night media access all worked like clock-work and media were able to get the access and the information they needed to cover all the action.

Once Fight Night itself is over, our night wraps up once the official post-event release and imagery has been sent out. Normally it’s then back to the hotel for a team drink and event goodbyes before everyone heads for home early the next morning. But this time, after the first event, it was rinse and repeat for the next two shows.

It was a fascinating experience to be a part of a Covid secure event team and to see how Bellator pulled it off. The logistical challenges involved in putting four events on across two cities in three weeks would be immense at the best of times, let alone in the midst of a global pandemic. The whole operation was incredibly slick from start to finish and it was so fantastic to have Bellator back in action on European soil. Hopefully, it won’t be too long before the next time… 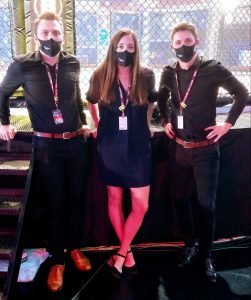