The tech team had an eventful few days at MIPIM last week, meeting some incredible innovators in the sector. Yet one question we were asked by everyone was “how can we engage with influencers?”.

With the boom of social media, every industry has developed influencers, and proptech is no exception. We’ve picked some of our favourite influencers who are shedding light on the top trends in the industry and have become our go-to twitter feeds for all things #proptech:

Having started out at Foxtons, James’ love of proptech has developed over the last 15 years and he’s quickly become known as the original proptech blogger. Running his regular Sunday PropTech Review, James offers insight on the breaking news of the week and interviews the leaders of the industry on his PropTech Consult Podcast, which he hosts alongside Eddie Holmes, the next contender on our list.

The founder and chairman of the UK Proptech Association (UKPA), Eddie has played a huge role in developing proptech in the UK. Alongside establishing the UKPA, which supports companies developing in the sphere, he has provided companies with advice and support through PropTech Consult and specialist recruitment firm, Hyre. From investment to hiring the right person, Eddie has been key to helping some of the biggest companies in the UK develop and grow.

As the proptech lead at RICS, Dan has unparalleled insight on the future of property technology, which he shares on his own twitter feed and in the RICS news updates. Most of his day is spent addressing the impact of data and technology, so if you’re looking for trends in the built environment, he should be your first port of call.

LSL Property Commentator of the Year, Henry has become synonymous with going against the trends, being one of the first to suggest we had witnessed the top of the housing market back in 2007. Since then, he has gone on to become the media’s go-to expert on property, using his experiences at Savills and The London Office to comment on the market and provide analysis of the breaking news.

The founder of Trussle, the online mortgage broker who have created a hassle-free way to get a mortgage online, Ishaan experienced first-hand the struggles that came with getting a mortgage. Having tackled this issue by creating Trussle, he continues to shed light on issues within the property industry and is not afraid to share his views on Twitter. 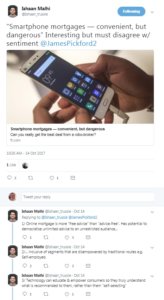 A leader in the property finance arena, Christian set up LendInvest with partner Ian Thomas to streamline the process of getting finance to buy, build or renovate property. As someone who is passionate about supporting start-ups, he set up The PropTech Meet-Up to allow start-up founders to share their story and exchange knowledge on the industry and has been an early investor in the likes of Seedrs, Plentific and The Memo.