Little more than a decade ago the notion that drones would one day revolutionise the delivery sector, was nothing more than that – an idea. However, ever since Amazon CEO Jeff Bezos announced that the e-commerce platform was testing drones as a method of delivery in late 2013, a number of other sectors have been racing to find new applications for commercial drones. In fact, the number of permits granted by the US’ Federal Aviation Association (FAA) shot up rapidly between 2014 and 2016, increasing over 3000% in the space of just 24 months.

While drones have the potential to revolutionise a number different industries, there’s no doubt that the sector attracting the most media attention in terms of development and testing is the delivery industry. Drones could allow delivery companies to bypass many of the challenges associated with the ‘last mile’ – the last stage of the delivery process before a consumer receives their package. The last mile is the most expensive and inefficient stage of the fulfilment process and a whole host of companies are exploring ways to increase efficiency and cut costs during this stage of this journey. 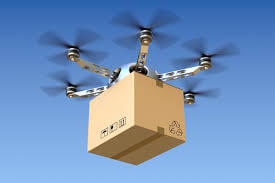 In an increasingly competitive online market, e-commerce companies are eager to cut delivery times and reduce costs in order to drive up customer satisfaction and loyalty. While legacy retailers are also exploring new fulfilment options as a means to help increase their online sales. Meanwhile, progressive logistic companies are also exploring revolutionary delivery options seeing start-ups slowly begin to claim market share – some are even using new technology to position themselves as favoured partners for more conventional logistics providers.

While mainstream drone delivery might be a few years away, a number of global brands are in advanced stages of commercial testing, and some are even entering live trail phases. Amazon Prime Air is the closest mainstream realisation, with two customers currently live trialling the service in Cambridge. ‘Air’ aims to deliver packages to consumers in less than 30 minutes and the retailer is using the trial to gather data to improve the safety and reliability of its systems and operations.

Meanwhile UPS have successfully tested their new drone delivery service in Florida. In a private trial the concept drone detached from its docking point in a modified UPS van, delivered a package to a remote farmhouse, and then returned to its charging station while the van’s driver made a separate delivery. Though the FAA’s regulations currently require drone operators keep their machines within line of sight, UPS is working collaboratively with the aviation authority to realise this concept.

While much of the media conversation currently revolves around delivering purchases to consumers, drones are also now being utilised in a variety of delivery contexts. Since mid-March, logistics company Swiss Post has operated more than 70 flights between a pair of hospitals in Lugano and recently announced they intended on making it a permanent service. While Silicon Valley based firm Zipline conducted a similar trial in rural Rwanda last year, these flights mark the first ever commercial deployment of drones in an urban area.

The commercialisation of drones, an idea that Amazon helped to set in motion back in 2013, certainly looks set to revolutionise the delivery sector. As the global drone market continues to grow and overcome legislative barriers, commercial delivery drones will begin to play a more significant role in the fulfillment process, and will no doubt be a part of the connected smart cities of the future.