Concussion in sport on a collision course 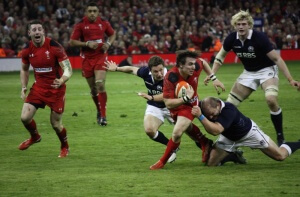 What a cracking start to the Six Nations it was two weekends ago. A dominant second-half performance from England ensured a famous comeback win over Wales in Cardiff and the all-important bragging rights heading into a World Cup, where the two will meet in the group stage.

Even though journalists and pundits alike were quick to praise Stuart Lancaster’s efforts, much of the post-match analysis was focused on the Welsh winger, George North. In the first half, the Northampton player went to the sidelines after being on the end of an accidental boot to the head from England lock Dave Attwood. Following eight minutes of treatment by the medical staff, North returned to the action.

He was in the thick of it again, however, after half-time when he was involved in another collision – this time with his own teammate, Richard Hibbard. It was a nasty clash of heads and one which left North in a heap on the floor, seemingly losing consciousness for a brief moment. The incident was not seen by the Welsh medical team, meaning that a groggy-looking North played on with no treatment or assessment.

World Rugby is satisfied with the explanation from the Wales medical staff that they did not see the incident, but surely measures have to be put in place to ensure this doesn’t happen again? It seems logical that the television match official (TMO) technology ought to be made available to the medical staff in order to quickly identify head injuries and ensure that the injured player(s) are seen to. The fact that North was rested for this weekend’s match against Scotland to allow further time to recover shows that he certainly shouldn’t have been allowed to play on against England.

Former IRB medical adviser Barry O’Driscoll quit his role in a row with his employers over their hands-off approach to the issue of concussion, arguing that players are being experimented on and anyone with a suspected concussion should “come off and stay off”.

There’s no doubt that representing your country is the highest honour in sport and players have been willing to put their bodies on the line, but perhaps it’s only after hanging up their boots that these professionals start to question whether sufficient safety measures were in place.

Rugby legend Jonny Wilkinson spoke to the Telegraph this week, as he reflected on the highs and lows of his career. Not a player to shy away from contact during his playing days, Wilkinson has questioned his choices in certain games where he was desperate to finish the match, despite taking hits that left him “completely out of it.”

The problem for Wilkinson was that there wasn’t a clear-cut protocol when it came to concussion. No one was able to make an assured call on whether he should return to the game or not.

But surely players today should begin to see the bigger picture and acknowledge that playing through injury can jeopardise their wellbeing in life after rugby.

Players with suspected concussions, in my opinion, should be withdrawn from the game and have the decision taken out of their hands. That said, much of the responsibility must remain with the players. Former full-back Gareth Thomas admitted last week that he played in games knowing that he had been concussed, but when the doctor asked him if he was fit to play on, he would assure them that he was. This is, of course, part of the issue – medical staff being pressured by players to allow them to carry on.

Nobody wants to see head injuries on the pitch like the ones at the Millennium Stadium. But one positive thing has come from this, as it has certainly brought to light the issues surrounding the current measures in place for tackling concussion and it looks like a revision of the RFU’s policy is imminent.

This is not an issue that is unique to rugby, though, as more than 4,500 former American Football players are currently suing the National Football League in claims that they were in the dark over concussion-related trauma.

Whilst playing through injury is both brave and commendable, players must think about life after their sporting careers and ensure that their long-term health remains a priority.