Does the power of celebrity have a place in politics?

Hollywood loves an underdog story. Rocky, Seabiscuit, Trump? Well, perhaps not quite. The world of celebrity (Clint Eastwood aside, no relation) was eerily quiet at Trump’s ascension to the presidency.

It seemed a script that even the zaniest Hollywood writer could surely not have dreamt up two years ago, and cast all manner of doubt on the impact of celebrity endorsement. With the might of the mainstream media and support from figures from Katy Perry, to Beyoncé, to Lady Gaga, to Chris Evans (no, not that one) behind her, Hillary Clinton still could not hold back the tide and beat a very average candidate.

Fast forward to June 2017, and Jeremy Corbyn achieved success in a way that Clinton simply couldn’t. It is worth quantifying that Corbyn did not ‘win’ the election, he was well short of a majority, but he did harness the potential of social media and celebrity to create a movement, amongst young people in particular, that led to a result that no political commentator had predicted (whatever he says now, The Guardian’s Owen Jones didn’t see it coming).

Nobody expected to see hashtags like #Grime4Corbyn taking off, but that’s exactly what happened. When even Grime MCs are wading into the debate, it is worth taking a step back to explore the role that the celebrity now plays in the political sphere.

First and foremost it is an amazing thing that the power of celebrity can play a role in bringing people otherwise totally disengaged into the discussion. The young, and many other people who felt disenfranchised before the election, were invigorated by the momentum Corbyn’s campaign generated.

Celebrities can also use their position to raise crucial issues, JK Rowling is an example of somebody who uses her platform to regularly do so (see below evisceration of Westboro Baptist Church), and Jamie Oliver is another who has done so to great effect.

.@WBCsigns Alas, the sheer awesomeness of such a union in such a place would blow your tiny bigoted minds out of your thick sloping skulls.

But there are also drawbacks. In some ways, politics is now more reductive than at any other time in history. The influence of platforms including Facebook and Twitter has changed the very nature of political discourse.

It feels as though we live in a world of increasingly polarised opinion. Cropping manifestos and political opinions into 140 characters might well make things digestible, but there is less room for nuance than ever before. With Brexit and the General Election, there has been a very dangerous recurrent narrative on both sides of the spectrum of ‘them against us’.

The last 18 months have been characterised by a surge in vitriol and division as tensions reach boiling point. The world isn’t split into good and evil, but too often the content we read online gives the impression that it is.

In this atmosphere of heightened pressure, do celebrities have a greater responsibility to think before they tweet so as not to fuel the fire?

There is an elevated risk in what is a pretty poisonous political climate of appearing crass, condescending or even incendiary. Piers Morgan and Katie Hopkins have both built their brands off the back of being controversial firebrands, and by saying what nobody else would (and there’s generally a good reason nobody else would). Milo Yiannopolous did the same until his Twitter ban. All of these ‘provocateurs’ delight in sowing division and taking ‘the left’ to task for all manner of perceived sins. 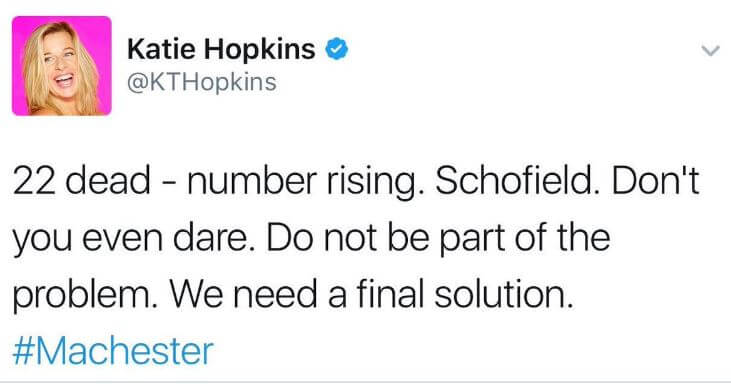 But fear not, the left is just as happy to fire back. Owen Jones takes great pride in deriding those with differing views, while Lily Allen is another who divides opinion, always ready with a forthright opinion and an unerring ability to upset people.

Even Rowling, the patron saint of millennials, was quick to point the finger at Nigel Farage and the now infamous ‘Breaking Point’ referendum poster in the immediate aftermath of the Finsbury attack. Some may agree with her, but others might contend that such a tweet was insensitive and misrepresentative. Many people disagree with Farage, but to imply that he advocates killing in the streets does nothing to advance the discussion and in the immediate aftermath of an atrocity looks like distasteful pushing of an agenda.

Let's talk about how the #FinsburyPark terrorist was radicalised. pic.twitter.com/Lx1woEaLKL

It feels increasingly that battle lines are being drawn. Celebrities have the clout to influence and effect genuine change, the recent election showed that, but with their visibility comes a greater degree of responsibility.

Social media is constantly changing the world around us. The power of celebrity has a place in politics, but exactly how far that power should reach becomes harder to quantify by the day.

In the increasingly factional current political climate, those with the greatest visibility in our society have a duty to think before they speak, pause before they tweet, and to seek to unify rather than divide.