More of our football stars should have media training

Super Bowl XLVIII will soon be here, following all the build-up, showmanship and usual interest in the half-time show.

This year’s match-up is between the Denver Broncos and the Seattle Seahawks, and it is billed thus: Irresistible Force vs Immovable Object.

The Broncos has the best offence in the NFL, the Seahawks the most brutish defence. For those who enjoy American Football, it should be utterly compelling.

If you have ever been in the US when the Super Bowl is on, you ‘ll know it is a fantastic event, even just to watch on TV while you’re there.

I was once lucky enough to be in the US in the weeks prior to the big game and caught a lot of the build-up.

What stuck in my mind was not so much the fantastic game, but a performance I saw the New England Patriot’s star Quarter Back Tom Brady give.

The brilliant Brady predictably ended up being named the MVP in the game as his Patriot’s narrowly triumphed over the Carolina Panthers (it was the Super Bowl also known for Justin Timberlake being party to Janet Jackson’s infamous wardrobe malfunction in the half-time show).  Brady has been a force in American Football and is one of only two QBs to lead their teams to five Super Bowls (the other being John Elway).

But it wasn’t his performance in the game to which I am referring, but a press conference he gave in the days before.

I remember watching the TV as he sat on a top table, facing a pack of sports journalists, not only from around the USA but the world.

Brady sat there alone, no press officer or PR man in sight (unlike the army of aides Premier League stars have on hand when they are facing the media). 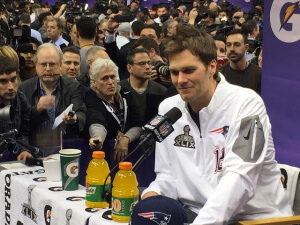 Flying solo, he handled question after question with aplomb. He engaged in tactical discussion, faced the tough questions head-on, spoke his mind and was able to share light-hearted moments with the media.

It was nothing short of fantastic.

When I compare that to the way our footballers deal with the media, it really puts us to shame. Not just the players but as a nation.

Brady’s chat was cliché free, comfortable, and more importantly, confident. Most footballers stumble over their words with sentences littered with well-known but forever dull football parlance. Less a game of two-halves, more a tale of two very different cultures.

For a more in-depth look at how the NFL differs in the way it treats the media and is actually written into contracts, you can read this excellent Football Writers’ Association blog here.

The thought of players being obliged to speak to the media is outlandish here in the UK. Sure, there are obligations which come with TV rights etc, but the system in the States is far superior, certainly from a fans’ point of view.

Some would point to the fact that Americans, as a people, are just far better than we Brits when it comes to talking. That is no slight on either us or them.

The FWA blog rightly points out the college system in the US. Not only does this expose players to the media, but while they are learning their sporting trade, they are continuing with an education.

Most football players in the UK are plucked from school as teenagers before signing pro forms when they are 17 or 18. 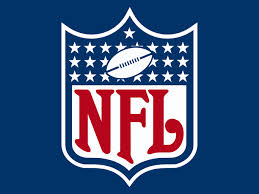 But when it comes to sports stars, the fact that the NFL players are media trained is a huge factor.

It means they are equally comfortable in front of a camera or a reporters’ Dictaphone. They can handle most things which are thrown at them.

Fans might say they do not want their heroes coming across as too polished as it means they are not being themselves. In fact, one Premier League club’s media head honcho once told me that he didn’t media train his club’s players because they preferred them to give ‘organic’ interviews.

I beg to differ. Media training actually helps those who receive it – be it a top football player, a company CEO or a charity campaigner – be themselves. It gives them the tools to be confident enough to make their point naturally, to not stumble over words, to take a positive role in interviews rather than being lead through them. Interviewees are not being themselves and are certainly not communicating properly when they are getting in a nervous muddle.

It is true that some players are naturally better than others at speaking to the media. Some already have an eye on a job in the media after they finish playing and Gary Neville and Lee Dixon, in particular, have shown how to take punditry to the next level.  David Beckham’s whole image improved at around the same time he got better at handling interviews.

Making comparisons with a super-star like Tom Brady is tough on anyone, but there has to be a yardstick.

Often with the media, you get one chance to shine.

Leaving dealing with TV, magazines and newspapers to chance really isn’t an option.  A footballers’ coaching should also include media training.