How to get noticed – 5 of the best Sport PR stunts

With England’s World Cup campaign finally getting underway, all the pre-tournament chatter can now be put to bed. Whether it’s Harry Kane’s playing weight or that tattoo on Raheem Sterling’s leg, none of it matters anymore… because football is coming home. Office sweepstakes are complete, sick days are at the ready and the bunting is hanging proudly. As ever, you can expect to see brands doing all they can to piggyback onto the tournament and leverage meaningful media cut through. We have looked at some of the best ways that it has been done before at the World Cup and other sporting events alike.

It has been said that the key to a good PR stunt rests on whether it checks off one (or more) of three things – it must be visual, clever and reactive. Heineken’s prank ad, The Dilemma, certainly meets those first two requirements.

The concept of the advert sees Simone, a diehard football fan, faced with a very difficult decision: stay with tradition and watch a Champions League game at his friend Mauro’s flat, or go to the Roma vs Real Madrid game alone and enjoy the full VIP experience. He opts for the latter, keeping his friends in the dark as to why he can’t join them. Or so he thinks… whilst sat in his seat at the game, suddenly his friends appear on the big screen, asking why Simone deceived them – cue mass whistling around the stadium.

Mauro now presents Simone with a fresh dilemma: stay at the game or get in a helicopter waiting outside to join his friends back at the flat. Somewhat begrudgingly, he chooses the latter. But instead of being led out the stadium, he is taken to a room where his friends are waiting for him. The brilliance of this prank is in its execution. With a full stadium watching and only one chance to get it right, everything was orchestrated around one unsuspecting fan and executed perfectly.

If Heineken are to be applauded for their creativity and execution on the big stage, food manufacturer Mattessons nailed a reactive response following Luis Suarez’s infamous bite on Giorgio Chiellini at the 2014 World Cup in Brazil. Fresh from Suarez’s apology to the Italian defender, the snack brand took out a full-page ad in the Daily Star to publish a note from their meats category director, offering the Uruguayan striker a job. The offer was to give the striker the chance to “put your passion for fresh meat to good use.” The role available to Suarez was as an ‘official meat taster’ and a similar ad ran in Metro’s job section, calling out for a ‘World Class Biter’. The quick turnaround and clever execution meant Mattessons was at the forefront of the brands looking to take advantage of the incident.

The London Marathon sees 40,000 people running 26.2 miles every year. Keen to tap into that number, Betfair created a shrewd campaign to get London Marathoners ‘betting on themselves’ with a complimentary £20 bet. Runners were encouraged to set themselves a target completion time. Those that managed to successfully finish within the time they set would earn a £20 (plus winnings) donation to a charity of their choice. For the runners that couldn’t beat it, Betfair donated the money to Cancer Research UK.

The best thing about this campaign was its simplicity. Whatever the outcome, money was donated to a good cause and Betfair essentially managed to get runners engaging in sports betting without actually betting. You cannot overlook the resulting exposure for their platform. In the same vein as Heineken, Emirates chose to use Benfica’s 65,000 capacity stadium to activate its sponsorship as the club’s official airline supplier. Prior to Benfica’s derby game against fierce rivals Sporting Lisbon, the crowd witnessed Emirates air hostesses performing a mock ‘safety demonstration’. The tongue-in-cheek display saw fans advised on how to hold up their scarves when a goal is scored, as well as the importance of keeping mobile phones safely stored in your pockets so you can fully concentrate on backing the team.

The cheeky spectacle was a great way of exploiting the sponsorship and astutely enabled them to get people discussing Emirates.

When it comes to PR clichés, there aren’t many better documented than floating something big down the Thames. In a close second is arguably creating something big and positioning it by a famous landmark. Enter, Pringles. Ahead of the 2014 World Cup, the stackable snack brand created a giant lucky football boot by Wembley, made from 1,500 Pringles cans. The purpose? To bring luck to the England team in Brazil following some research carried out that found British people are superstitious when it comes to their sporting viewing habits.

The structure was 5.3 metres long, 1.8 metres wide, and 1.9 metres high – weighing a staggering 490kgs in total. From start to finish, the assembling required 278 hours of manpower to put together, with a team of designers, sculptors and engineers working around the clock.

Pringles’ Lucky Boot was created off the back of a study that revealed that half of Brits choose to sit in the same ‘lucky seat’ when watching each match, whilst 45% won’t drink from any other glass than their ‘lucky’ pint glass. The research carried out gave the campaign that extra news hook you need and it’s safe to say the result was the finest giant Pringles statue I’ve seen in my time… 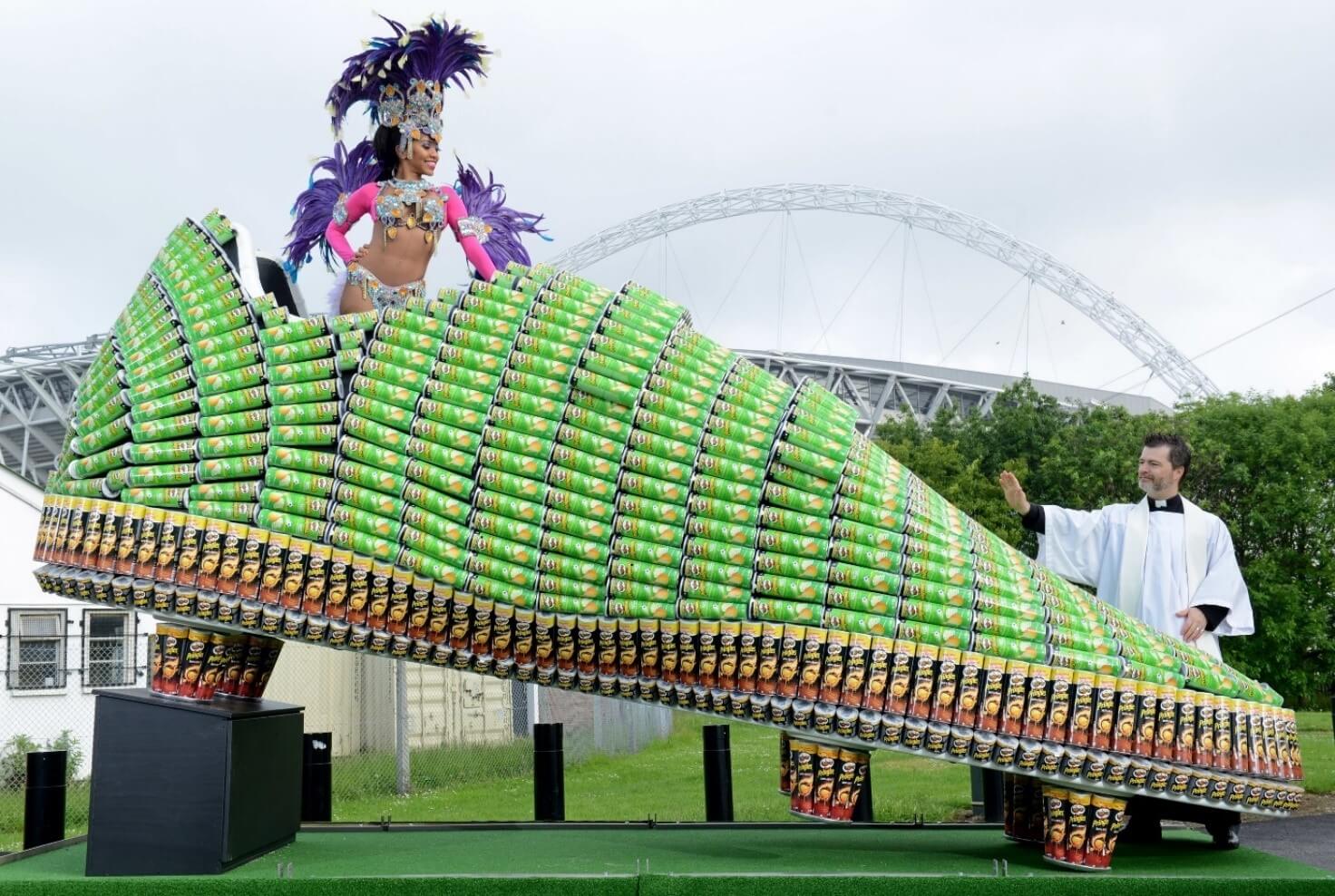 If you’d like to find out how our award-winning sports team can help bolster your brand speak to a member of the team today.