Moeen Ali – is it right to ban the bands?

Most of us have worn silicon wristbands at some point. Be it to ‘Make Poverty History’ or with the belief that the blue band of rubber we found in the school playground would automatically help to ‘Beat Bullying’. But today, what were once little more than swappable fashion accessories are now at the centre of a heated political debate involving an English cricketer who dared to express his non-sporting opinions on a global sporting stage. Yes, in case you were wondering, cricketers have political views too.

In a dramatic turn of events, having previously been cleared by the ECB to wear his Save Gaza and Free Palestine wristbands during the third Test against India (they rightly deemed the statement humanitarian rather than political), Moeen Ali was told yesterday that match referee David Boon had overruled this decision and banned him from wearing the wristbands on the field of play, in keeping with the ICC’s equipment and clothing regulations. Yes, clothing regulations, not political standpoint, not sporting etiquette, but clothing regulations.

This attempt at sugar-coating an issue which clearly goes deeper than simply cricketers’ clothing is a classic example of a governing body not telling it like it is. If they are trying to tell us that they don’t want to be associated with the Gaza conflict, they should just say it. Not talking about something doesn’t make it just go away.

It now means that Ali will have to play the remainder of this test, and the series, with a cool breeze on his left wrist where his political opinions used to be. 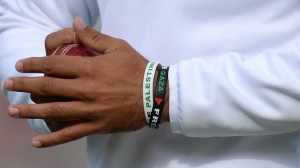 There are two main arguments to be made here, the first being one which deserves more time than a debate about silicon wristbands allows. I would usually refer to the first rule of writing that I was taught at school; to argue for and against, and summarise at the end, but in this particular case I can’t see any merit in defending the ICC’s actions, and I won’t.

Is it fair that a cricketer with political opinions is made to pay for expressing these (he will be fined if he wears them on the field of play again)? May I refer to the aforementioned problem whereby too many of us convince ourselves that we are politically and socially aware because we wear a wristband or have tweeted #BringBackOurGirls. Ali has a genuine political stance and surely this should be celebrated, not stifled.

This issue appears to stem from some bizarre preconception that there are areas of life in which political discussion is unacceptable, particularly in sport, and I find it very hard to understand how society, in all its forms, will progress if our automatic reaction is to suppress those people who, by definition, aren’t “supposed” to have political opinions.

The second argument focuses on the blatant inconsistency and hypocrisy on show from the ICC here. Part of the statement issued by the ICC on Tuesday morning read, “The ICC equipment and clothing regulations do not permit the display of messages that relate to political, religious or racial activities or causes during an international match…”

If we pick apart this statement, particularly the “political, religious or racial” messages part of it, the immediate question that springs to mind is where do we draw the line? Perhaps the ECB permitted him to wear his wristbands because they were wary of being branded inconsistent, seeing as the England team spent the entire day in the field yesterday with Help for Heroes logos on their shirts, to commemorate the 100th anniversary of the First World War. Fair enough, the ECB were consistent (and not in their usual boring, cautious, conservative way), but why would the match referee condone this particular statement (visible on their clothing) and refuse Ali to make his own personal one?

The same could be said of players who wear Help for Heroes or Livestrong wristbands – does the latter not give off the wrong message about a player’s opinions on doping in sport? The ICC haven’t lifted a finger on these particular wristbands and so clearly the issue isn’t one of “clothing regulations”, but rather a more deep-rooted one, one concerning the Gaza conflict and not much else.

This debate reflects badly on our society and rigid culture. Just as The Rose Bowl held a minute’s silence yesterday to remember our heroes who fell in the First World War, the ICC could do themselves a huge PR favour by showing some empathy towards a conflict that, in reality, they don’t fully understand.