Is first female CEO of Lloyds a statement of intent for other women?

Inga Beale has been named as the first female CEO of Lloyds of London in its 325-year history, smashing through the so-called glass ceiling to make history in her industry.

Beale, 50, has an ample 30 years’ industry experience and will replace outgoing Richard Ward in January, with her appointment making her one of the most powerful women in the City, with 900 staff and a market of 90 syndicates and companies under her control.

In my view, this is a very positive step in the City where the gender divide has remained stubbornly high, with four in every five workers being male. The appointment of a female to such a prestigious post will surely encourage the steadfastness of other ambitious women pushing to reach higher ranks. 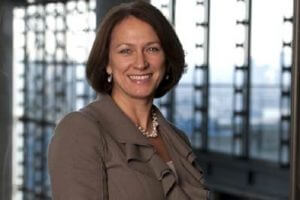 As the debate continues as to whether there should be quotas for females in the boardroom there is great value in women establishing themselves as role models. A number of initiatives have been set up to establish such quotas. For example, the 30% Club, a group of companies including Diageo, RBS and John Lewis, has pledged to get more talented women into their boardrooms. However, reports have shown that fewer than half of staff considers their employer to have a clearly formed policy on diversity. In addition, just one in five believe that their firm actively recruits with diversity in mind.

The absence of women in the upper echelons of the Lloyds structure has been obvious in the past, with Claire Ighodaro currently the only member of its 12-strong board.

Beale has frequently vocalised the opinion that there is a necessity to have greater diversity in Britain’s boardrooms. She believes that a variety of perspectives will lead to balance and that, “Diverse boards help companies make better decisions, which affect the bottom line.”

However, in previous interviews, Beale has stated that she believes women can sometimes hinder their own career progression and has been quoted as saying, “Some of the time we put our own ‘glass ceiling’ on ourselves because we are not confident in our ability. I talk to a lot of women who have been working as I have for 30 years in the industry and we wonder what happened to all those women who started when we did.”

Whilst quotas may help to promote women in business it appears there needs to be a change of attitude as well with women pushing themselves forward, embracing competition and having absolute faith in their own merit. The more women become visible as powerful, high-flying businesswomen such as Beale, the more motivated others will be to follow.

If women go into their careers believing they can reach that level, rather than doubting they ever will then that mentality will propel them forward. There is no better inspiration for this than seeing others who have reached the top and are respected by those who they share the board with.