Spray Tanning: Is it really the best alternative? 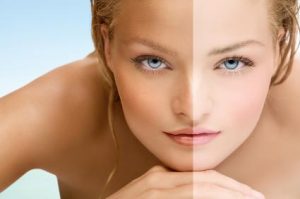 With the recent cold and dreary weather, many are opting for fake tans to hide their pale winter skin tones. One in ten British men and one in four British women use fake tan.  It’s growth in popularity since the 1980’s has created an uproar amongst health officials who have warned time and time again of the serious health hazards that come with using sunbeds.  While many listened, they still couldn’t resist finding other ways including spray tanning and self-tanner.

But now, after years of thinking, we had finally found a healthy alternative to achieving sun-kissed skin, scientists have revealed spray tans pose their own health concerns.  Those who enjoy the regular spray tan could potentially be at risk from the main ingredient, which if inhaled, can be potentially damaging to your overall health.

The substance—known as dihydroxyacetone(DHA)—enters the lungs and is absorbed into the bloodstream where it could damage DNA and cause tumours.  Scientists claim that it can make cases of asthma, emphysema, and chronic obstructive pulmonary disease (COPD) worse.

Staff at spas and salons that offer spray tanning often do not provide the appropriate equipment like goggles and masks to customers.  This allows the harmful chemical to enter the client’s eyes and lungs.

The substance has the ability for creating mutations and changing DNA in living cells.  Scientists are not concerned with the reaction of the skin colour change but rather with the reactions that occur deeper down with living cells that might change the DNA, causing a mutation, and what the impacts of that would be.

However, researchers are quick to state that these tests have not been tested on humans yet.  They also believe that for the casual spray tan user, side effects are not a serious concern.  Those who are at most risk are the frequent users and salon staff members who are exposed to the substance regularly.

As tanning is increasingly popularized in today’s celeb culture, the serious health hazards are often hidden from the public. Celebrity culture plays such a strong role in defining what is beautiful and influences how younger generations view themselves. The health concerns associated with being beautiful are often ignored and kept quiet by beauty conglomerates.

Health PR’s have battled the beauty industry, criticising them for hiding the seriousness of the potential side effects of tanning beds.  The public should be fully aware of the health concerns that are associated with tanning. The beauty PR practitioners who represent clients with products that have health concerns should not keep these problems from the customer.  The customer has the right to know what they’re paying for the repercussions that it can have on their health.  If they choose to expose themselves, knowing all the health concerns, then the beauty industry has done their due diligence.