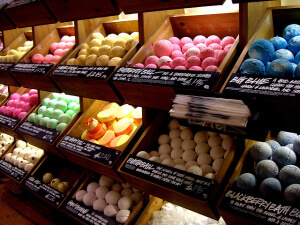 Lush has taken action to fight against animal testing in the cosmetic industry.  Though made illegal across the EU three years ago, many companies still run tests on animals for cosmetic products.  Lush took to their flagship shop on Regent Street to raise awareness about animal cruelty by bringing these brutalities to the public’s attention.  They exposed testing methods normally done on animals and tested them on an actual human on one of the busiest streets in London.

Performance artist, Jacqueline Traide, 24, was hauled on a leash to the shop’s window. Over the course of the next 10 hours, she endured numerous poking and prodding, was force-fed, and went through two saline injections. Not to fret, she didn’t suffer any ‘actual’ pain. But the experiment stopped shoppers and those passing by dead in their tracks as they witnessed the all too real reality of animal testing.

As a Fashion & Lifestyle PR  team, we keep abreast of PR stunts and are also big Lush consumers. As such two thoughts came to mind, the first being shock and dismay, followed by a desire to help Lush fight against those malicious test centres and cosmetic companies who use, abuse, and then kill innocent animals.

PR stunts take place every week, with some gaining more coverage than others. Lush took a step outside the conventional box by combining the harsh reality of the cosmetic industry with emotions of shock and horror to appeal to an empathetic public, and as a result, it was a huge success.  The stunt challenges men and women to consider the darker aspects of an industry which exclusively exists to make us feel good.

The response to the stunt was predominantly positive, with hundreds stopping to sign the ‘fight against animal testing’ petition. Yet, a large number of individuals simply stopped, watched, and moved on without taking the time to make a difference. Criticism has come from the public, stating that while it is still legal in the UK to sell cosmetics that have been animal tested in other parts of the world, including North America and China, the stunt would have perhaps been better suited in a country that legally allows the cruelty to happen. Others spoke out saying Lush took the image of violence too far.

Lush received positive press coverage around the world for their stunt.  Yes, the images were startling and uncomfortable to view, but they made people aware of the dark secrets in the cosmetic industry.  It encourages men and women to consider how their product was created the next time they make a cosmetic purchase. As far as PR stunts go, the shock factor paid off with 200,000 signatures for their petition and chances are an increase in their sales. A startling, but successful campaign that’s got us thinking twice about my next cosmetic purchase!