It was not long ago that Kim Kardashian was a humble stylist to the stars. But look at her now; one of the worlds most recognised celebrity faces, wife to a millionaire rapper, star of her own reality TV show, fashion designer, businesswoman, model, actress and an international brand worth millions.

It doesn’t stop there.

The American socialite turned TV star now owns her very own clothing line, perfume range, jewellery collection, weight loss product line and a string of work out DVDs. She has starred in movies, graced hundreds of magazine covers, and taken part in some of the world’s most reputable retail endorsements; all contributing to an estimated net worth of $65 million.

This year the Californian entrepreneur even managed to land on Forbes’ Celebrity 100 list at #80, ahead of Oscar-winning actresses such as Meryl Streep, Gwyneth Paltrow and Natalie Portman and celebrated authors like Stephen King and J.K. Rowling.

So, what’s the secret to her success?

Kim maintains a strong relationship with her fans through a continual stream of communication. By keeping her followers updated with what is happening in her life, she encourages them to revisit her social media profiles as loyal followers.

Forbes recently reported that a small component of Kim Kardashian’s income comes from social media. Like many celebrities, Kim makes a bundle of cash being paid by businesses and brands to tweet to her many fans and followers.

The greater the level of engagement, the bigger the fan base, the higher the number of endorsement requests, the larger the pay cheque. It couldn’t be simpler.

Any fan of Kim Kardashian will be familiar with the hit reality TV series ‘Keeping up with Kardashians’ – an American show starring Kim and the rest of the Kardashian clan which first aired on E! in 2007 and is now watched all over the world. 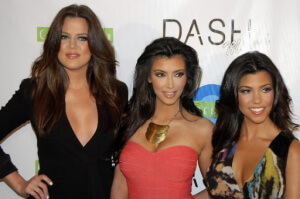 Part of the programme’s appeal is that the public can identify with the Kardashians and relate to their personal issues, despite their wealth and fame. From Khloe Kardashian’s divorce with NBA basketball player Lamar Odum, to Kim’s long line of failed relationships, and Rob Kardashian’s weight struggle, to the birth of Kourtney Kardashian’s son and daughter; fans of the reality show have enjoyed unlimited access into the Kardashians’ private lives.

The Kardashians are a transparent brand that don’t pretend to be anything other than themselves, working to make as much money as they can. Together they are worth over $80 million – living proof that the public are more likely to trust and engage with a brand who is honest and relatable, than those that are not.

Kim’s transparency has also helped her in situations where her reputation has been at risk. In times of trouble, she will immediately release a statement for the media and her fans to address a situation before it spins out of her control. 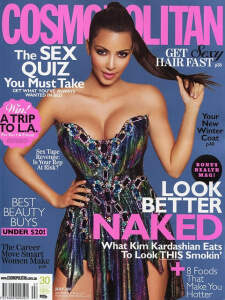 After the magazine’s launch, Kim immediately shared the following statement with her fans and the media:

“When I did this shoot for the international covers I had no idea that Turkey was planning to run my story on their cover THIS month.

“My Armenian heritage means a lot to me and I’ve been brought up to be incredibly proud of my family’s background and culture so as an Armenian-American woman it is a huge honor for me to be on the first ever Armenian Cosmopolitan cover.”

“I have an amazing relationship with Cosmopolitan Magazine. World-over, Cosmo is known as a fun and inspiring magazine for women of all races, shapes, sizes, regardless of their political beliefs and I really hope that if I can bring awareness to the issue, then this is an accomplishment.”

Whether you love her or hate her, most people will agree that Kim Kardashian markets herself and her brand commendably.

Kim is always ready to face the spotlight and is mindful that every appearance and interview reflects upon her brand. Renowned for her friendliness towards reporters, photographers, and even irritable paparazzi; Kim keeps the media on side, often agreeing to a photograph or a quick comment even when she is not working.

Besides coupling with a long list of highly-paid athletes and rappers, Kim also seeks out successful brands to attach her name to  (Sears, Sketchers, Bebe and Glu Mobile to name but a few!) Partnering with these successful businesses and brands have expanded Kim’s reach and amplified her reputation enormously – not to mention her annual income!

As of May 2014, the Kardashian queen ensured that her name will remain in the headlines for years to come by marrying millionaire rapper Kanye West in a typically lavish Italian ceremony.

Our favourite PR catch-phrase couldn’t be truer if we journey back to Kim Kardashian’s rise to stardom. The Californian socialite shot to fame after a scandalous sex tape was released by Vivid Entertainment in 2007, after it was sold to them by her former boyfriend and rapper, Ray J.

While most people would have shied away from such an incident, Kim saw it as a business opportunity and faced the media head-on. Seven years later, and she’s a global megastar.

More recently, the 34-year-old star shocked fans when she chose to model nude for a ‘Break The Internet’ photo spread in the 2014 winter issue of the popular Australian publication, Paper Magazine.

Though scandalous, Kim’s nude images sparked debate on television shows and radio stations all over the globe, motivated millions of tweets and Instagram posts across social media, and generated coverage across newspapers, magazines and online titles worldwide.