Should we give Angelina Jolie a break?

A video of Angelina Jolie has emerged today where she is seen looking extremely gaunt with bloodshot eyes and her hair scraped back…quite the opposite to her usual, red carpet glamorous, self.

The not so recent video was filmed over 15 years ago, in the late 1990’s by her ‘friend’, Franklin Meyer. Franklin has claimed that he filmed this video with Angelina’s consent and has added to his friendly gesture by revealing alleged details of the six-time mother and charity worker on her involvement with heroin and cocaine.

Franklin says that he often sold her these drugs and this video was footage from one of their meets. You can clearly see from Angelina’s telephone conversation in the footage, with whom it is assumed is her father, Jon Voight, that she is very much distressed.

Angelina Jolie has always had a difficult relationship with her father due to his infidelity which then resulted in her parents breaking up. Her mother sadly died of breast cancer in 2007 and Angelina has recently had a double mastectomy to reduce her chances of developing the illness.

This video which has now been seen across many news sites worldwide seems to me to be completely irrelevant. It was filmed prior to her having children and she has described herself in these years as being in a dark place, which judging from her family life, is not surprising.

It is a shame that Franklin Meyer decided to show the media this video over 15 years later now she is settled and happy with a beautiful family. 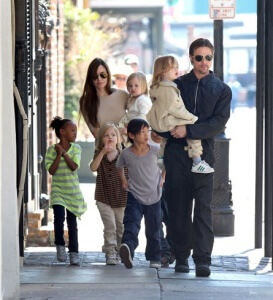 Not only that, but Angelina has supported over 29 charities including UNICEF, Global Action for Children and Alliance for the Lost Boys of Sudan. Her most recent work has included meeting with the Duchess of Cornwall to discuss the issue of sexual violence and she is trying to raise awareness about the use of rape as a weapon of war. She was recently in London co-chairing the Global Summit to End Sexual Violence in Conflict as part of this campaign.

Although Angelina may have made mistakes in the past, she is now a fantastic role model through her extensive charity work and happy family life. I think Franklin Meyer should be far more ashamed than Angelina for sharing this footage which will no doubt be seen by Angelina’s children at some point in their lives.

Angelina Jolie has always been quite open about her wild past though and has previously admitted to taking drugs at times so this scandal really is nothing new. She completely cleaned up her act and has turned her life around. Since the small blip with the Team Aniston/Team Jolie debate which today still divides opinion, she has become a PR dream.

She is always seen out with her children and finds time to campaign against great causes whilst also maintaining a great work ethic, so will her reputation suffer from this malicious video or will we still support her in the way she deserves?

Personally, I think the video should have stayed buried and we should all give Angelina a break!